This past August, I had the privilege of traveling (at last!) to Barcelona with my father. It was a chance-of-a-lifetime trip and I won’t soon forget it. Thanks dad. Not the same without you, mom. David and Camille: you, Avignon, and Venasque were the perfect combination.

Taking a brief respite from La Rambla – a vibrant avenue shaded by trees and peopled by tourists which winds toward the Mediterranean – I am strolling through the aisles of a Modernisme-influenced market. Replete with fresh produce glowing in technicolor, fish (sea bass, clams, swordfish), an assortment of cheeses, and charcuterie, this seems to be the place to begin a proper Spanish meal. And though I didn’t participate in the rite, I don’t think there’s anything quite as cultured as taking in a sampling of the market’s fare at one of the in-house eateries.

Having taken a very impressive tour of Camp Nou earlier in the week (with some amazing touch screen stations offering the best Barça highlights, ever) I am now sitting a matter of meters from the best football player on the planet waiting for El Clásico to kickoff. Having devotedly watched FC Barcelona so many times over the last years, it is a bit surreal to be in this 90,000 plus capacity stadium watching Lionel Messi warm up with Dani Alves. The grass is a pristine green, almost unbelievably so, and kickoff for the first leg of the 2012 Super Copa is only minutes away. It is wonderful to be engulfed in a wash of crowd sound, to see the physicality of football up close and, of course, to see my team win 3-2 at home (I was very pleased with the showing of goals from Messi, Pedro, Xavi, Di Maria, and Ronaldo). 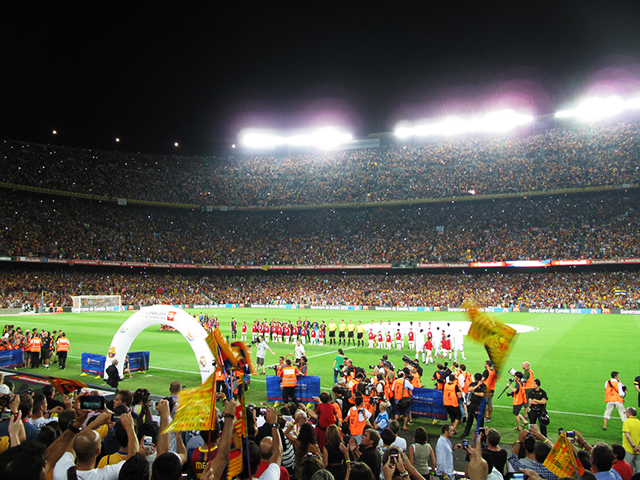 How I didn’t hear more people raving about the genius of Antoni Gaudí is anyone’s guess. My father and I are wandering through this architectural delight which was designed in the early 1900s as a playground of sorts for Barcelona’s upper crust. We hear classical Spanish guitar weaving through trees and trace the notes to a small band on the hillside. We enter the Gaudí House Museum, so called because it was his residence for twenty years, and I marvel at how innovative the building’s structural turns are. It is a monument to the simplicity and beauty of Gaudí’s design, and is easily one of the most stunning homes I have ever seen. A slight walk and we are in the main terrace of the park, with ceramic mosaics adorning the sides. And finally, we arrive at the most iconic section, where two Hansel and Gretel-like buildings stand as sentinels at the entrance and lead to a mosaic dragon fountain amidst some lovely steps. 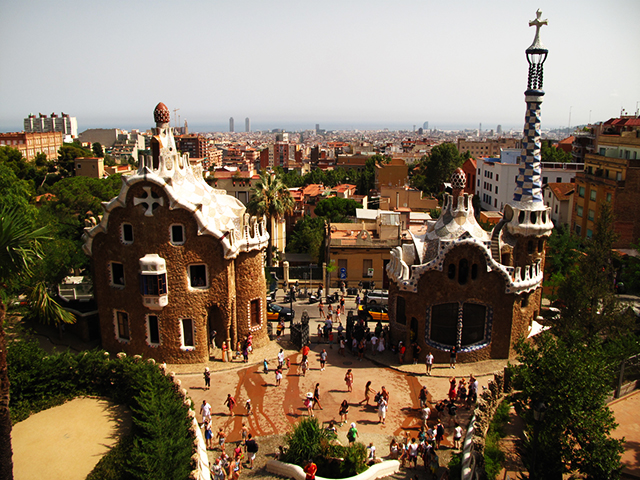 Having been so thoroughly wowed by Park Güell, I am looking forward to seeing Casa Milà (more commonly called La Pedrera). Another of Gaudí’s masterpieces, La Pedrera was envisioned as an apartment block, but my feeling is that anyone who was fortunate enough to have lived there was floating in an architectural reverie. We start on the rooftop, where some kind of breeze seems to have caressed the chimneys, ventilation towers, and stairs into lovely round, almost organic shapes. The view of Barcelona is pleasant here, and the day is perfect for leisurely glances. We move down to the attic and walk through an exhibition explaining Gaudí’s construction and process. Now further below, I am roaming through gorgeous rooms and spaces, all decorated with 20th century furnishings and decor. Each room is more breathtaking than the previous and I realize I have never been so taken with architecture; it’s a strangely spiritual experience. Despite this being a mechanism of man, La Pedrera seems to so exquisitely evoke the natural world. This, by far, is the best building I have ever visited.

We are standing in a line that coils around the premises. I take in the façade and from where we are standing, I begin to wonder if this might be a waste of time. Finally we enter and are all agog to absorb the passion façade, which is a portrayal in stone of the life, passion, and resurrection of Jesus. My father and I look through the different scenes and rehearse them to each other excitedly, as if we were discovering them for the first time. And indeed these stories sculpted into the façade, though unmoving themselves, bring a profound animation and life to ancient tales. We are now walking into the crossing (so called because it connects the passion façade on the west with the nativity façade on the east) and I am breathless. The last time I felt this was upon seeing Al Khazneh – “The Treasury” in Petra hewn directly into a sandstone cliff. A sense of light and wonder, at once magical and spiritual, envelops me as I look everywhere around me. Columns resembling trees gather into a forest overhead and honestly, it is perfect. We take our time, and finally being in front of the nativity façade brings a familiar sense of joy. This structure so bursts with the glory and majesty of God that I wonder how our modern Christian faith – frightened of the material world and subsequently tolerant of such impoverished architecture  – expects people to experience a spiritual resonance when they enter our buildings. I am leaving with deep impressions, thankful for Gaudí’s imagination, and delighted with this story that I am entangled in.