Why You Shouldn’t See Sarah’s Key

In a truly bold (aka lazy) move, below I re-publish (aka copy and paste) a piece I wrote for HK Magazine last year.  I had a lovely time hanging out with the editorial team at the magazine, and to be honest having to watch this film was perhaps the only lowlight of my entire experience.  Without further ado, I present to you my humble review (with some embellishments). 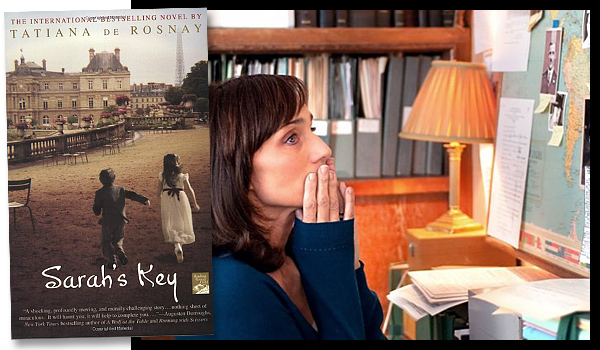 It’s not easy to make a Holocaust film these days. Especially after the likes of “Schindler’s List” and “The Pianist,” you have to balance an appropriate sense of gravitas with an originality that will give audiences new avenues to engage with the subject matter. “Sarah’s Key”— based on Tatiana de Rosnay’s eponymous novel — does not do this. With a blasé payoff, an emotional hollowness, and terribly contrived dialogue it makes a negligible contribution to an increasingly cluttered anthology of Holocaust-themed motion pictures—and you’ll be more or less the same without seeing it.

Taking as its focal point the infamous Vel d’Hiv round-up of 1942 where French police herded around 10,000 Parisian Jews into local confines prior to sending them to concentration camps, “Sarah’s Key” begins with 10-year-old Sarah Starzynski (Mélusine Mayance) playing with her four-year-old brother Michel. After a series of abrasive knocks on the front door, Sarah’s mother is faced with some smartly clad policemen who want to arrest each family member. In a moment of remarkable wherewithal, Sarah informs them that her brother isn’t around and quickly locks him in a cupboard, promising to return. Moments later, the police apprehend Sarah and her parents, leaving Michel hidden inside. The three Strazynskis are transferred to a paltry indoor velodrome and then to another French camp, with Sarah continually haunted by the key in her hand and the memory of her brother.

In 2009, Julia Jarmond (Kristin Scott Thomas)—an American journalist living in Paris—is writing a story on Vel d’Hiv’s deported Jews for the struggling publication she works for. The plot thickens when Julia discovers the apartment she, her husband Bertrand (Frédéric Pierrot) and her daughter are about to move into—an apartment that has belonged to his family for 60 years—was in fact Sarah’s home. Further research reveals that neither Sarah nor Michel were sent to the concentration camps, making Julia incandescent with curiosity to discover what’s become of them. Her quest understandably lessens her enthusiasm about the apartment, which adds greater stress to her already strained relationship with Bertrand.

Though the narrative’s alternation between Sarah’s and Julia’s realities is initially interesting, after a while it starts to feel like a cunning way to postpone revelations both the characters and audience are seeking. The sheer number of hoops Julia has to jump through to uncover the truth about the Starzynski kids is so soap-operatic that the treasure could never be worth the dig. When things finally come to light and the whodunit is over, the prevailing sentiment is: “Who cares?”

Equally yawn-worthy are the acting and the chemistry between the characters. In a story like “Sarah’s Key” you want to empathize, but the film’s pawn-like use of characters doesn’t allow for any real emotional investment. Scenes where Julia and Bertrand argue or where Sarah and her family huddle in the velodrome are strangely devoid of feeling, making it difficult to know who these people are and, again, to care.

One of the script’s many didactic misadventures occurs when Julia asks a young English co-worker what he would have done had he been at Vel d’Hiv. His response, “Probably I would’ve just watched it all on television, you know, like the bombings of civilians in Iraq or Afghanistan,” is obviously intended to get us to take a long, hard look at our own moral compasses, but is executed with such ridiculous heavy-handedness that the only thing I wanted to do with my moral compass was smash it against his forehead. A string of cliché lines like “Truth has a price whether you like it or not” and trite moments (cue the tape of the guard who decides to help Sarah solely because she calls him by name) and it’s easy to see that “Sarah’s Key” simply rehearses platitudes and isn’t interested in doing any serious, original moral work of its own. This tactic may be moot if your characters are Muppets celebrating Christmas, but with humans in a Holocaust film it cheapens suffering and comes out pretty asinine.