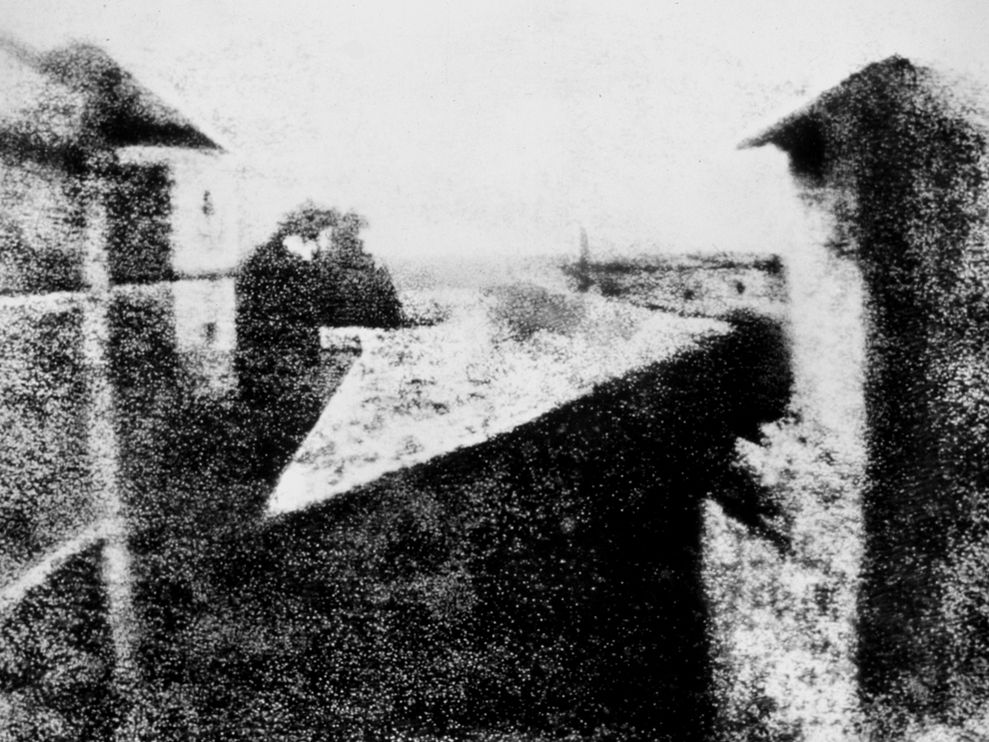 There it is. The world’s first (documented) photograph. It is a heliograph, taken in 1826 by French scientist Joseph Nicéphore Niépce which required him “exposing a bitumen-coated plate in a camera obscura for several hours [an estimated eight] on his windowsill” [National Geographic]. It’s a shoddy image by today’s stands, but one can only imagine the almost transcendental elation he must’ve felt upon seeing his courtyard and outbuildings materialize on a plate before his very eyes.

Needless to say, things have changed. While we may still have a certain amount of deference for the photograph, we have long since done away with (culturally, psychologically, and even emotionally) the effort and technique of the photographic process. And honestly, who cares?

It’s fairly obvious why the sheer time commitment of an eight hour exposure could be problematic (Joseph’s fury when a resulting heliograph featured photobombing care of his bratty four year old would be a case in point). However, there’s something far more significant that’s lost in our age of insta-immediate-digital photography: joy.

When I was in university, I took a black and white photography course and the best part of the whole thing was the hours (yes, hours) I spent developing photos in the dark room. Time didn’t exist in there and being the perfectionist that I am, I was happy to wave goodbye to it given the prospect of even one Ansel Adams-like print. Though developing is cold and scientific in terms of its reliance on basic chemical reactions, there was something meaningful about having to wait. Waiting means that the certainty of an outcome isn’t a given. A photograph could turn out horribly (and often did), but there were times that it turned out perfectly and those moments were nothing short of magical.

Patience was a photographic non-negotiable of the art form’s early years. With adolescence, things became faster and now, in its “adulthood,” there’s hardly any waiting at all. What we insta-see is what we insta-get. And it is to this modern reality that we owe the excess of (mostly unmemorable) photographs in our world, not to mention the host of people whose gratification must be as instant as their pictures. The image quality is clearer, but never has the joy been more obscured.

With that in mind, I present to you six images taken with my iPhone. I feel some pleasure about them (mainly because of the lines and some light/shadow interplay), but I’m sure if it took me hours to develop them the joy would be as tangible Mr. Niépce’s bitumen-coated plate.

View all posts by Suhail

3 thoughts on “Views From New Windows”

Sermon: A Five-Part Gospel on Lazarus, Brent, and How God Feels About Death” (Brent Woelke’s Funeral)

Homily: In Whose Hands Would You Rather Be? (Reign of Christ)

Christmas Eve: An Anatomy of the Gospel