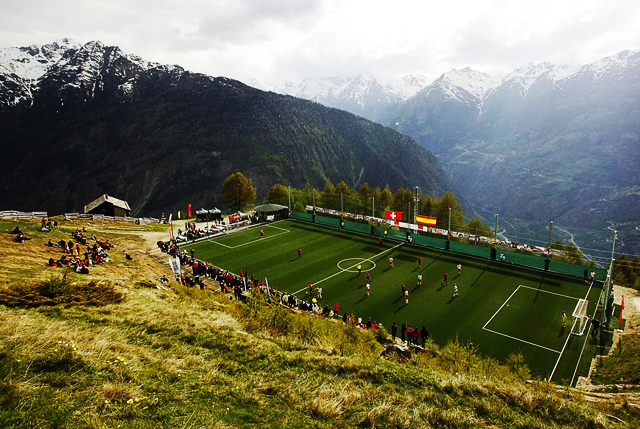 As our bus rattled up the hill (not pictured above), a Pakistani guy around my age was telling me how, once as a devout Muslim, he had a dream where Jesus appeared to him.  So profound was the experience that he left everything to become a follower of this apparition, thereby incurring the contempt and rejection of his family and community.  I was agog as he rehearsed the details.  By this time, I was feeling quite at home amongst my fellow band of travelers, comprised of people from Nigeria, Yemen, and India, to name a few.  They were all kindhearted and welcoming, as if we had rounded many corners of life together.

When we arrived, we filed out of the bus and entered into the building.  And as we descended a flight of stairs and were welcomed into a spacious dining hall, I suddenly felt a small palpitation about what was to come.

I had been graciously invited to participate in an evening of food and football (as in “futbol!”) co-sponsored by Christian Action and Canadian International School of Hong Kong (CDNIS).  Christian Action is a nonprofit organization that seeks to address the multifaceted needs of refugees and asylum seekers in Hong Kong, and as one of my closest friends is regularly involved in their work, I heard about the fun and games that were to take place at the school.  I tend to get terribly excited about any prospect of playing football, and this occasion was no exception.  It wasn’t until the dining hall that the excitement began to subside.

Up until that moment, you see, the people I had traveled with were just people, friends even.  But as soon as we entered the dining hall and were warmly greeted by students and staff from CDNIS, my counterparts became refugees and asylum seekers.  I realized that there might be some confusion about which “team” I was on, and a deep sense of self-consciousness and embarrassment washed over me.  “I am not one of them,” I thought as I shook hands and introduced myself to various CDNIS folk.

Life has a way of drawing imaginary albeit impermeable divisions between people doesn’t it?  A sampling of these divisions are those that can exist between sacred/profane, rich/poor, beautiful/ugly, white/non-white, man/woman, educated/uneducated, popular/unpopular, helper/helpee and so on.  To be sure these categories are a way of ordering existence, but their tendency is to do great violence to authentic and mutual relationship.  As social beings, we define ourselves by what we are or what we are not in relation to others; in the process, we so easily move beyond mere differentiation and into determinations of status.  These determinations are concerted efforts by which we try to find value and, ultimately, comfort.  The problem is that they are often conducted at the expense of others and bring about judgment, eventually dumping us wholesale into holier-than-thou territory.

Much to my shame, my solace that day amounted to little more than a hope that people would notice that I, unlike those I had arrived with, had a pair of Camper shoes.  Not only did I want to be perceived as different, but better.

Thankfully, although I was a total fake on the inside, I didn’t ever verbalize that I was neither a refugee nor an asylum seeker.  But the fact that I was having such a heated interior monologue and that there was a deep urge not to be identified with the Christian Action crew troubled me.  After all, why the fuss?

With these notions circling within me, I took to the field for the game.  A student was quite amazed that I spoke English so well and though this amazement is by no means unique (I have met many an individual who seem to believe that being Indian and speaking English fluently is a paranormal phenomenon), the particular context we were in made me all the more sensitive.  “My English is good for a refugee, you mean,” I thought.  We formed teams comprised of people from both Christian Action and CDNIS and the game finally began.

As the minutes ticked away, some fantastic football flourishes ensued.  Goals were scored and people high-fived each other.  Something else happened.  The distinctions between “us” and “them” – distinctions so tangible and indelible moments earlier – began to slowly dissolve.  Nobody was thinking about who was from CDNIS and who was from Christian Action; who had family, residence, money, education, or the prospect of a bright future.  We were just people playing football.  With a common thread of humanity weaving us together, there on a small five-a-side artificial football pitch in the Upper School outdoor playground, we embraced who we all were.  And in the glow of this stunning similarity, I forgot about my Campers.

Especially when you’re acutely aware of what divides you from others, this forgetting is a beautiful thing indeed.  It usually happens when you can recognize within yourself something you thought was previously so foreign, when you intentionally place yourself in a context where divisions are moot, and through friendship.  Often these three things are mutually inclusive and give rise to one another.

The people from Christian Action did all three for me that day at CDNIS and I’m only sorry that I was not able to stand alongside them more faithfully when we arrived.  Though I wish I had the internal strength of character of my own accord, I’m thankful that football jarred my internal pillars of division and tilted them more closely to the ground.  In the end, as our bus left the premises and wound down the hill into the night, I was glad to have been invited.  I have longer distances to go.  But next time, as my friends so obviously are, I hope to be more at home with our team.