The Artist (It Do Matter if You’re Black and White) 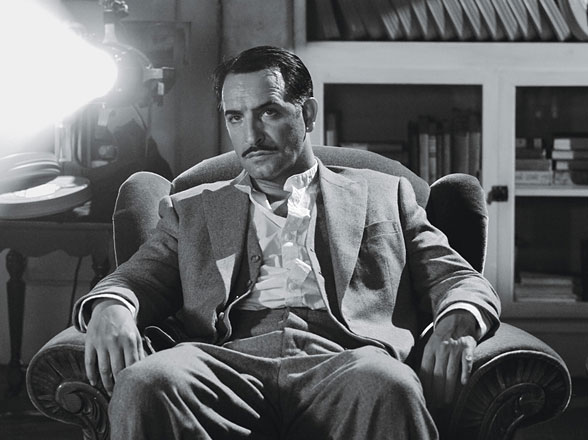 The Jazz Singer premiered on October 6, 1927 at the Warner Brothers flagship theater in New York City.  By this time, the cultural palette of the American and European bourgeoisie had become rather accustomed to film as a form of entertainment.  Though silent film with live orchestral accompaniment was the mainstay of the industry, recorded sound – at least in the form of music and singing – was trickling decibel by decibel into movie halls.  Nonetheless, this October screening was special.

Scores of people bedecked in smart monochrome filed into the theater to watch Al Jolson do a jazz number or two on screen.  Just after Jolson sings “Dirty Hands, Dirty Face” –  about 17 and a half minutes into the film – he directs his attention toward the crowd and his piano player (both in the film) and amidst a clatter of crowd noises says “Wait a minute, wait a minute, you ain’t heard nothing yet.”  This brief, rather ironic moment of spoken dialogue was the first instance of synchronized speech used to further dramatic action in a Hollywood feature.

There was a very audible, favorable response from the audience in the theater.  Later in the film when Jolson’s character has a scene of dialogue with his mother, (Wikipedia says) the audience became hysterical.  Despite the fact that the cumulative length of synchronized speech in the film amounted to no more than two minutes, the crowd entered the New York City evening as a (again, according to you-know-who) milling, battling mob repeatedly chanting Jolson’s name.  More importantly, it was a watershed moment for cinema after which neither film nor the industry surrounding it would be the same.

For one, orchestra players – once so vital for providing live musical accompaniment to moving pictures – became redundant in the face of recorded sound.  Departure from the world of silent film also meant that actors not only had to look the part, they had to sound it too.  This was a particularly disastrous prospect for those whose voice or speech were unflattering.  Even audiences had to adjust to the culture of the talkie.  During the silent film era, much to my horror, it was common practice for audiences to chatter away during screenings and verbally engage with what was materializing on the silver screen.  The advent of recorded speech and sound in film made audience silence necessary because it was impossible to follow the plot otherwise (to those of you who just love to comment on the action while it’s going on, let the record show that this principle still holds; let it also show that I may not want to see a film with you, ever).

These days, it’s difficult to imagine cinema without special effects, c.g.i., and 3d, let alone without dialogue and color.  Yet it is precisely this context into which Michael Hazanavicius’ The Artist steps.  The film was a late addition to the Cannes Film Festival last year, and a week prior to the beginning of the festival appeared in competition for the Palme D’Or alongside 19 other films including Terence Malick’s The Tree of Life and Lars Von Trier’s Melancholia.  The Artist premiered at an 8:30am Sunday morning screening at the Grand Théâtre Lumière (Cannes’ hallowed 2,300 person theater) and most of the seats were empty.  This was probably due to the fact that Michel Hazanavicius had no real reputation to speak of (unless you count directing a couple of James Bond spoofs, in French), that most of the press were recovering from the previous night’s Cannes shenanigans, and that the film in question was a black and white silent film in the vein of Hollywood’s golden age.

There were two other screenings that Sunday and as the credits rolled at the third screening that evening, The Artist received a standing ovation that some say lasted up to twenty minutes.  The adulation was virtually unanimous, with one Telegraph journalist – in a moment of typical British understatement – saying that it was the “most out-and-out joyous film of the festival to date, a valentine to the glories of silent cinema, a triumph of artistic teleportation, pure effervescence that gives crowdpleasing a good name.”  Clearly, this turn of phrase caught the attention of The Weinstein Company who, despite the film’s lack of Hollywood stars, dialogue, or color, paid a seven figure sum for its distribution rights.

Naturally, being the film aficionado that I am, I write all of this from first-hand experience as I was at Cannes that day (I also attended the premiere of The Jazz Singer).  You can imagine how happy I was to hear then that The Artist was playing in India around the time that I was there this past January.  Unfortunately, the film decided to make its grand entrance a week after we left and so I had to wait a few more weeks for opening night in Hong Kong.  Two days prior, I giddily booked a seat for a 7.50pm screening at ye olde Broadway Cinematheque (which, incidentally, currently has a gorgeous poster for The Artist emblazoned on the building’s side).  A part of me was ready to join wholeheartedly in all the laudatory gushing as I have recently grown quite fond of all things silent (thank you The Art of Buster Keaton DVD Box Set), another part was sure that my considered post-film opinion would be the prick that let the air out of all this balloonatic media hubbub.

I felt a measure of delight as the opening credits rolled and I realized that the film was in a 1:33 boxy aspect ratio, recreating an important technical feature of silent films of old.  Nonetheless, the film’s strongest suit is not its obvious faithfulness to pre-talkie technique, it’s its faithfulness to the spirit of Hollywood’s golden age.  The Artist, like the best of Buster Keaton, is really a matter of earnest and straightforward storytelling, always told with tinges of melodrama and romance.  It’s about a gifted individual whose procession forward is impeded by his humanness, about his struggle to preserve his gift (and ultimately himself), and how these things play into a love story.  It’s a simple, familiar tale that naturally evokes compassion and feeling because we’re all in the same boat in one way or another.  And while the characters are by no means one dimensional, they seldom stray beyond the boundaries of old fashioned goodness, which to my modern moviegoing sensibilities was both refreshing and striking in its own right.

Nonetheless, the reason The Artist works now – in a modern milieu – is primarily because of Michel Hazanavicius’ superb script and direction, and because leading man Jean Dujardin (who rightly won Best Actor at Cannes for his performance) is awesome.  It is also because it offers something different (since our oversaturated media mentality demands it) and is not merely a bland homage to days of former film glory.

“Delightful” is my word du jour for The Artist.  Amidst a landscape so often cluttered, it was lovely to once again be reminded of cinema’s magic, purity, and power.  Though it seems since October 26, 1927 we have been in need of increasingly exaggerated sensory experiences at the theater (cue last year’s glut of 3d movies and accompanying glasses), I thoroughly enjoyed a taste of relative media regression.  Besides, we’ve pretty much heard everything by now.  If only you were around, Al Jolson, to behold the sweet irony that the only novel thing that seems to remain for us today is silence.  I suppose that’s why The Artist got a twenty minute standing ovation.

* Breaking news (as of 12.44pm Hong Kong time, February 27): In consideration of this piece, the American Academy of Motion Picture Arts and Sciences has recently decided to bestow The Artist with Best Picture, Best Director, Best Actor, Best Costume Design, and Best Music honors at this year’s Oscars *