iRacist: An App for Any Racist Occasion

After one particularly grueling game of football (3-3 being the end result), I walked to the train with a few teammates.  We must have looked a rather motley bunch, what with one Somalian, a Nigerian, a Nepali, a Yemeni, and myself.  We got onto the train and there were a few empty seats.  The Yemeni sat down on the far right, leaving one space between him and a Chinese girl.  The Somalian looked at the empty seat, then at me as if wondering whether it was suitable to sit next to the girl; I encouraged him to do so.  A few seconds after he sat down, the girl, who was on her cell phone, proceeded to stand up, walk down the car, and sit elsewhere.

What ensued amongst our group was a rather animated conversation about why she had moved and, more importantly, whether something racist was what so swiftly propelled her behind to new pastures.  My friends told me that it was a common occurrence for people to get up on public transportation when they – people of color – sat down.  I was getting more and more incensed and told my friends that if that ever happened again, they should prevent the person from getting up and say “No, you stay, I’ll move.”  Perhaps then it would be a little more of a win-win situation, preserving their dignity and enabling the potential seat-evacuee to get their wish of not having to sit next to some colored person.  I think it’d also be a nice way to show mr. or mrs. hot pants how lame they were about to be.

Amidst all this heady racist conversation, a neutral-colored light bulb went off in my head.  If only there was some accessible and user-friendly way to discern the racist vibe of any given situation.  Like an iRacist app (don’t anyone dare try and patent this before me).  And so I decided to undertake the task of providing some helpful guidelines to make sure you and your friends don’t go blue in the face (can I say that? iRacist to the rescue, bro) deliberating whether or not it was racist.

My minions are developing the technology for this wonderful idea as we speak, so in the mean time I’ve provided a few answers to some of the hottest racist conundrums.  Feel free to email me your particular racist quandary and I’ll happily share my insights.  I’m becoming a bit of an expert on the subject.  Let’s start with the situation that reared its head at the outset of this piece.

01.  The Case of All-Too-Ironic Seat Transference

I don’t think this was racist at all.  Note that the Chinese girl was on her cell phone.  What happened is that when the Somalian sat down, something in his genetic makeup scrambled the signal reception of her iPhone 4s (and accompanying pink bunny-eared case).  She was faced with with a caller’s conundrum – to drop her call or not?  As anybody with a brain would’ve done, she decided that it was best to continue the call.  And the reason she moved so far down the car instead of, say, to the seats across or nearby, is because Somalians have particularly strong call-scrambling genes.  Had my friend been a Mexican, things would have turned out very differently (though she would’ve still had to move seats thanks to a 3gs Mexican gene).  Moral of the story: if anyone should be classified as racist in this episode, it’s the iPhone freaking 4s for having such ethnically-sensitive reception.

02.  The Case of Banana Throwing and Monkey Chanting

There’s been no shortage of racist hoo-ha at this year’s Euro 2012 in Poland/Ukraine.  Rumor has it (aka “photographic evidence,” see below) that a banana was thrown on the pitch during the Italy Croatia game, and that said banana was directed towards one Mario Ballotelli, who just happens to be of a dark skin color.  Some people also reported hearing monkey chants in the vicinity of Ballotelli’s whereabouts.  Certain overly pc types who find a bigot under every banyan tree imply that banana throwing and monkey chanting is an unequivocal act of racism.  What?  Since when does charitably throwing a potassium-rich fruit to a fatigued football player amount to racism?  And as for the monkey chanting, it’s perfectly possible that there were actual monkeys in the stadium, who simply came to enjoy the spectacle of 22 humans kick around a ball for 90 minutes.  How rude of us to forbid monkey chanting and in so doing, forbid monkey attendance.  Whose the racist now?

03.  The Case of Doing Accents

I know this guy who does this absolutely hilarious Chinglish accent.  It’s so funny to hear him say “L” for every “N” when he speaks English.  Like instead of “If you don’t know me by now, you will never never know me,” he says “If you dol’t low me by low, you will lever lever low me” (his favorite film is Filing Lemo).  Of course, my friend is Chinese and he learned English in a local school.  So personally I think it’s pretty ridiculous for you to accuse him of being racist.  What’s that?  What do you mean what about people who do accents of countries they aren’t from?  Oh, you mean if someone like me, being Indian and speaking with an average American twang, did a Chinglish accent.  Lo problem.  More than a question of racism, it’s a question of accuracy.  If you’re doing a crap accent, it’s just embarrassing for everyone (even racists).  And if you’re doing an accent perfectly, then by definition it shouldn’t be racist since people actually talk that way.  Lext!

04.  The Case of Nose Covering

Some of my African friends tell me that it’s normal for people (non-Africans) to rather conspicuously cover their noses when they pass by.  My friends were wondering if this was racist.  Unlike the other cases, I think it’s pretty obvious what’s going on here.  Africans smell.  Wonderfully.  The fragrance they exude is so aromatic that people cup their hands over their noses to try and keep the scent in their nasal area as long as possible.  Really, it’s a compliment.  Why else would people take the time to make so unabashed a physical gesture in public?  Another little known fact is that Chanel made its name in fragrances simply by having its peons run around Africans, all in the hope of trapping some of the fragrant air in resealable bottles.  So next time you see someone covering their nose in public, you can be sure there are some sweet-smelling Africans nearby.  And you had better do yourself a favor and follow suit, or else risk losing your chance to stop and smell some seriously awesome roses.

All of us people of proper color (i.e non-whites) have experienced the confusion that comes from being randomly checked every time we travel.  Unlike our white counterparts, it seems that security personnel make a special point of thoroughly examining, investigating, and analyzing everything about us.  I once walked behind a Eurasian friend and in front of a Caucasian friend as we went through security at O’Hare, only to be singled out for a more detailed interrogation.  For years I thought this type of stuff was racial profiling.  Now, I know better: it’s because the safety of white people isn’t as important as the safety of non-white people.  I sometimes hide a knife or two in my bag just for fun, just so me and the security dude can have a moment of hilarity.  “Gotcha!  As if I would let you potentially injure yourself by carrying this!” he says.  “I know, I know.  My safety is your utmost concern and you’re really just demonstrating your care for me,” I reply.  And we have a right old chuckle about it then and there.  So, people, whenever a person of color gets the third degree at your local airport, consulate, mall, or street, just remember that somebody loves them more than you.

This brings us to the end of our cases for today.  I hope I’ve cleared up a few things for you.  My only concluding remark is about the iRacist app (when it comes out): for best results, do not go near Asians, Africans, Latinos, Aboriginals, Native Canadians, Native Americans, African Americans, or any other minority group.  For some reason that we have yet to determine, their genes tend to scramble the app’s data reception.  Shame really. 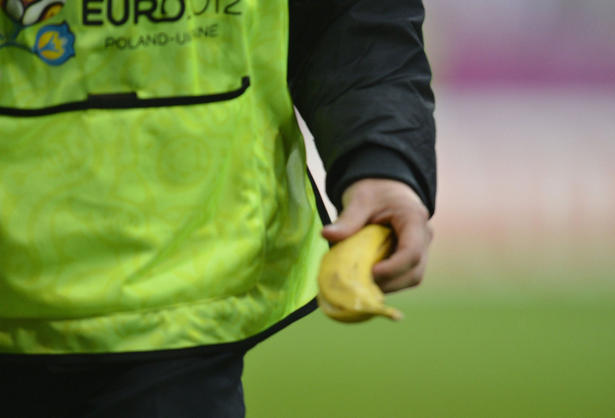 View all posts by Suhail

6 thoughts on “iRacist: An App for Any Racist Occasion”

Christmas Eve: An Anatomy of the Gospel

Becoming a Father (Round 2)