20 “Foreign” Films to Die For (Preferably After Viewing) 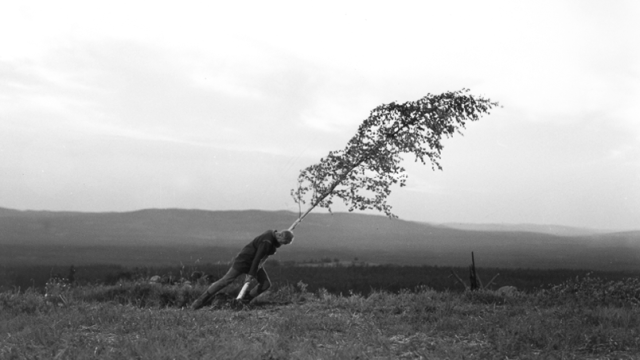 Herbert, armed with no less than twenty good reasons, finally attempts to push over a tree.

As I thought about how best to commemorate this our twentieth issue, I came to the unfortunate realization that my piece would have to incorporate the number twenty.  Even more discouraging was that by necessity (aka a shoddy showing of ideas from the old brainbox), “twenty” was going to have to present itself in some kind of list.  “What a large number,” I thought, as the superhuman prospect of compiling any list featuring such numerical magnitude began to loom large.  Suddenly, I was not in so festive a mood.

But then I thought about you, dear anonymous-reader-whose-days-blur-unhappily-together-till-the-cyberlight-of-a-new-Checkerboard-issue-emerges, and decided that I was going to make a list if it was the last thing I’d do.  And as my task took on this charitable pomp and circumstance, my subject came gloriously into view.  “Foreign films!  Twenty of them!  What the reader needs, the reader shall have!” I shouted, in 17th century British governmentspeak [editor’s note: the fact that I was at home, by myself, at said time should in no way inhibit the moral fortitude of this piece].

“So, foreign films eh?” you ask.  Yeah, eh.  As I began to think about the notion of foreign films, it struck me that the term itself is peculiar.  After all, foreign films are only foreign to those who don’t understand the film-in-question’s language(s).  Ultimately, the term reveals more about the cultural hegemony of English-based (dare I say American-based) films in our modern world.  Should foreign films really be considered foreign or should we – true plebeians of the proletarian persuasion – throw off our shackles, unite, and subvert the tide of this capitalistic cinematic imperialism?  Tomay-to, tomah-to.

What really matters is that I have chosen twenty (“Twenty!”) films that I found foreign.  In other words, I had to read subtitles for each viewing.  Don’t get me wrong, though I am quite the linguistic acrobat – I have mastered various dialects of English from Chinglish (Chinese-accented English), Indian-glish, British, American, and Canadian – the films below were all beyond my scope of expertise.  In fact, the way these particular films invited me to venture beyond my usual comforts and become a pilgrim, foreigner, and stranger instead  (all the while drawing the travails, perspectives, and nuances of various countries and cultures into keener view) was precisely one of the things that was so deeply affecting.  As Atticus Finch says in To Kill a Mockingbird, “You never really understand a person until you consider things from his point of view – until you climb into his skin and walk around in it.”  Though by no means equal to the real thing (by which I mean visiting these countries as opposed to some Hannibal Lecter-themed escape plan), these films clothed me in a celluloid skin in their own way.

So, dear ever-increasingly-enlightened-now-not-so-anonymous-reader, I present to you my controversially-titled Twenty Foreign Films list.  The list is neither exhaustive (most are from the last decade and several films that I love are not featured) nor is it intended to be objective.  To determine which ones made the final list, I mostly included films I saw in the cinema, films that represent a variety of countries, and films that conform to a secret logic known only to me.  This is after all my list, eh?

So the next time you encounter that awful conundrum of what to watch, why not check out one of these gems?  In my opinion, they are each stunning in both form and content, not to mention powerful, haunting, and transforming.  And by all means, if the pictures and my amazing descriptions below don’t provide enough incentive or information, feel free to write me and I will be happy to wax eloquent about any one of these films till the cows come home. 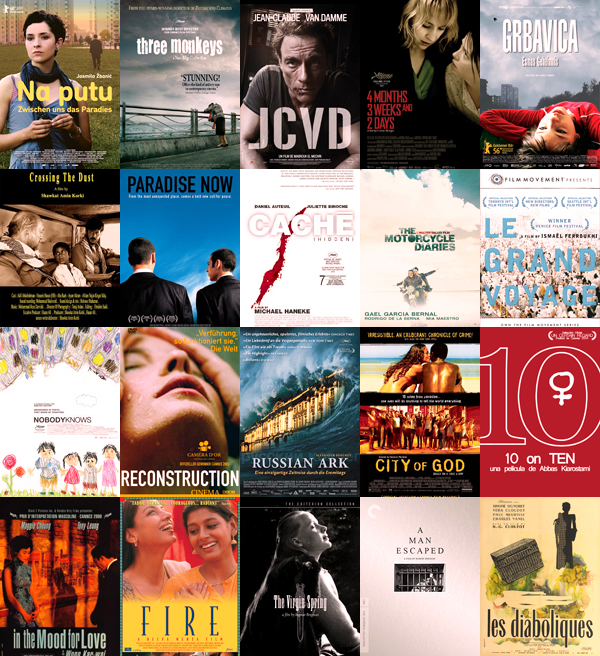 Film title, followed by date of release (starting with most recent), country of origin, and director:

← A Camera is Worth a Thousand Words
Level Playing Fields →